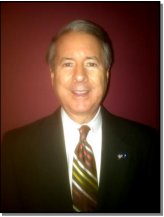 EDITOR’S NOTE: The EOC held a full committee meeting February 10, 2014. The election of chair and vice-chair occurred at this meeting.

Columbia – David Whittemore, an Easley businessman, has been elected as the new Chairman of the South Carolina Education Oversight Committee (EOC), a term which will begin immediately. Whittemore replaces Neil Robinson, who served as Chairman since 2009.

Whittemore stated “I am very honored and humbled to be elected to this important position in a very critical time for education in South Carolina.”

Whittemore, a self-employed insurance broker, was appointed to serve as the House Education and Public Works Committee’s business representative to the EOC in January 2011. The appointment was made by Representative Phil Owens, Chairman of the House committee.

A graduate of Easley public schools and Clemson University, Whittemore was a member of the Easley City Council for 19 years, including three terms as Mayor Pro Tem. He also served as SecretaryTreasurer of the Pickens County Municipal Association for 18 years and served as President of the Greater Easley Chamber of Commerce.

Whittemore is a member and Deacon at Easley Presbyterian Church. He and his wife Cindy Blackston Whittemore have three children.