Note: The Condition of College and Career Readiness 2017 will be released by the ACT

Columbia – Today, the results of The ACT® assessment for the South Carolina 2017 high school graduates were released, showing that 15 percent of high school graduates are meeting the college ready benchmarks in English, Reading, Mathematics, and Science, up from 14 percent of graduates last year. The average ACT composite score of 18.7 for SC students fell short of the national average score of 21.0. While the percentage of students meeting college readiness benchmarks is low, 77 percent of South Carolina’s 2017 ACT-tested graduates stated they aspired to attend postsecondary education.

“We have an aspirational gap in our state,” said EOC Chairman Neil Robinson, Jr., a Charleston attorney. “More students want to earn an associate or bachelor’s degree than are academically prepared. The release of these data always leaves me struggling to understand if South Carolina is committed to ensuring that our students are prepared for the future, a future where two-thirds of the jobs will require employees to have a postsecondary degree or industry credential. These 12th graders are ready to take on the world and accomplish their dreams. This report shows we are not doing enough as a state to help prepare them to be successful.”

Robinson asserts that state policymakers, business leaders, education leaders, and the public at large should take reports like The ACT seriously. “We cannot continue to kick the can down the road in education and hope that something improves in the next 20 years,” stated Robinson. “We are doing a disservice to the students and families of this state if we don’t acknowledge that the current system is not meeting the needs of the majority of students. We have to close this aspirational gap.”

Robinson acknowledges that SC needs to ensure that all students are being given the opportunity to take rigorous coursework in high school and to address deficiencies in mathematics, reading and science achievement early -- long before high school.

“If we don’t acknowledge there are problems and address the problems systemically, we will soon be surpassed by every other state in educational outcomes and businesses will have to import qualified workers,” stated Robinson.

Another alarming finding in the ACT results addressed the state’s teacher shortage. Five percent of the graduating class of 2017 indicated that they planned on majoring in education. The most commonly indicated college majors of interest for the 2017 class were: undecided; nursing; business administration and management; medicine; and biology. 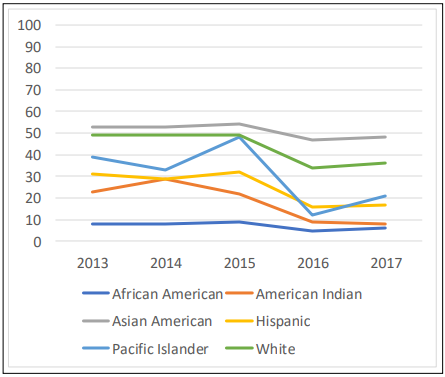 “I find these data to be the most troublesome; said Robinson. “We must address the needs of all student groups if we are to make meaningful progress in this state.”