Editor’s Note: Copies of the “Report on the South Carolina Child Early Reading Development and Education Program,” which includes an Executive Summary, can be found online at www.eoc.sc.gov.

Columbia – The South Carolina Education Oversight Committee (EOC) released a report today evaluating the Child Development Education Pilot Program (CDEPP), a full-day educational prekindergarten program for at-risk four-year-olds. The program, which was written into permanent law as the Child Early Reading Development and Education Program last legislative session, began in 2006 as a pilot program for children residing in the plaintiff districts in the school funding lawsuit, Abbeville County School District et al. vs. SC. The program is implemented in both public and private centers across the state. 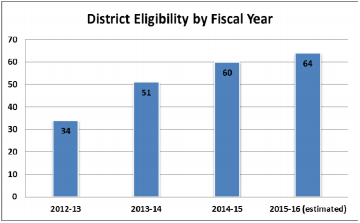 According to the report, at-risk four-year-olds residing in 60 school districts are currently eligible to enroll in a program in either a public school or in a private child care center, a significant increase from the 34 eligible school districts in fiscal year 2012-13. The expansion in accessibility comes as a result of the S.C. General Assembly expanding the eligibility criteria in Fiscal year 2013-14 to include districts with a poverty index of 75 percent or more. In Fiscal year 2014-15, the General Assembly further expanded the eligibility criteria to include districts at a poverty index of 70 percent or higher. The General Assembly currently funds the full-day, 4K program at $75 million.

According to Melanie Barton, Executive Director of the S.C. Education Oversight Committee, the agency charged in proviso with evaluating the program, 46 percent of all at-risk four-year-olds statewide are now being served in a publicly funded program, a percentage that also includes children being served by federally funded ABC voucher programs as well as Head Start. A majority of the approximately 12,000 students being served by CDEPP in school year 2014-15, 86 percent, are being served in public schools in 57 school districts. Three CDEPP eligible school districts -- Barnwell 45, Horry, and Union -- chose not to participate in CDEPP during 2014-15. Approximately 144 private providers serve the other 14 percent of students statewide in the program, including students in the eligible, non-participating school districts.

While access to the program has significantly expanded, an analysis of the academic achievement of students participating in the program does not support a dramatic improvement in student achievement. While a greater percentage of CDEPP students met or exceeded state standards in ELA and mathematics than did low-income students who resided in the CDEPP districts but who did not participate in the program as four-year-olds, the statewide achievement gap between CDEPP students and all other students in the state is not narrowing. 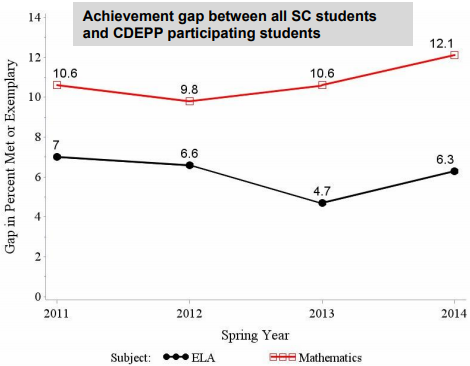 “We are encouraged to see expanded access to at-risk four-year olds as well as the growth of these students,” stated Barton. “However, we remain concerned that we are not succeeding with this at-risk population of young people. In math, the gap may be increasing.”

As was highlighted in previous EOC evaluations, Barton pointed out the need to focus on quality within the program to make an impact on student achievement.

“Ongoing, consistent quality enhancement strategies in both public and private classrooms are essential to achieving positive student outcomes,” stated Barton. “Private providers should be required to participate in ABC Quality at a minimum. Additionally, the analysis of PASS results shows us there is need for enhanced training, technical assistance, and other professional development opportunities to improve instruction among all classroom settings.”

Barton also pointed out there may be a need to incentivize programs who focus their efforts on quality improvement and student growth, using data from classroom and student assessments.

The report also documents the implementation of the program by the SC Department of Education in the public schools and S.C. First Steps in private centers. A follow-up report will be published in mid 2015 to document the initial results of the recently-implemented CIRCLE assessment, which measures early literacy skills.

Eight recommendations are included in the report, which is required to be sent to members of the S.C. General Assembly. The recommendations follow: Achievement gap between all SC students and CDEPP participating students